Poland is home to some of the world’s most beautiful castles and palaces. Among them, you can find medieval fortresses, elegant mansions, as well as fancy buildings straight from fairy tales or legends. These beautiful, magnificent buildings inspire artists, stimulate the imagination, delight with style and original shapes. From the famous Wawel castle in Krakow to located in extremely picturesque location castle Niedzica, here are the most impressive castles in Poland that you must-see. 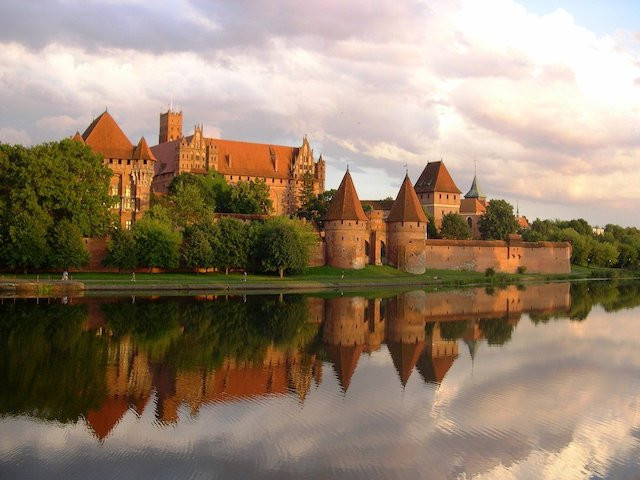 Located about 70 km from the Gdansk, Malbork’s Castle is the most powerful medieval fortress in Europe. This complex of three castles, picturesquely situated on the Nogat River, was the Teutonic Order’s capital for 150 years. The origins of the castle date back to the second half of the 13th century.

From 1309, Malbork was the seat of the great masters of the Teutonic Order and the capital of one of the most powerful states of medieval Europe. With a high degree of probability, it can be said that the Teutonic Knights modeled castle on the Abbasid fortress Uk-Haidir.

Some architectural solutions and the facade of the Palace of the Grand Masters can confirm that. The castle is also proclaimed a UNESCO heritage site. If you are planning on visiting this castle, give yourself a couple of hours to explore this masterpiece in full. A visit to the Malbork castle will be an unforgettable experience. 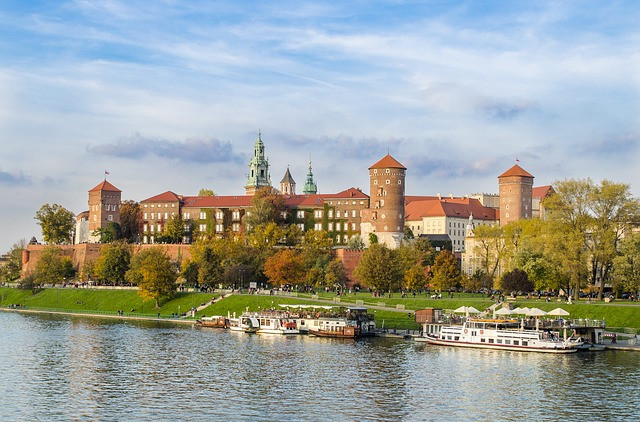 Perched on the top of the Wawel Hill built in both romanesque and gothic styles, the Wawel Royal Castle was once the most important seat of the Polish rulers. In 1978, Wawel, along with the Old Town, Kazimierz, and Stradom, was entered on the UNESCO World Heritage List. Within the fortified walls is a Castle and a Cathedral. However, the castle draws the largest crowd as it contains most of the exhibitions. The history buff will not be disappointed. For anyone visiting Krakow, this sight is a must-see. 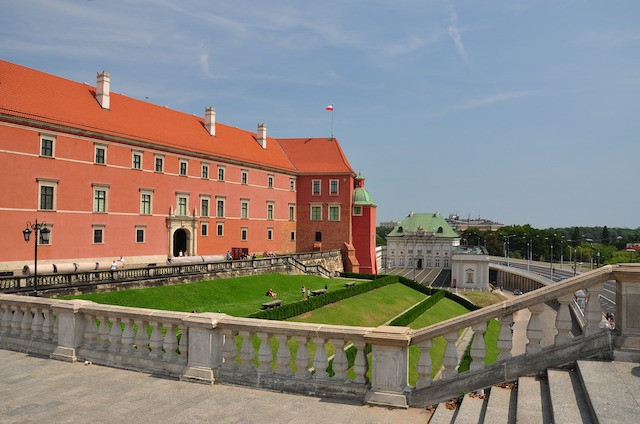 The royal Castle in is one of the most popular and significant buildings in the country. Maybe it isn’t the most beautiful Castle in Poland, but we should not forget that castle was rebuilt from complete rubble. Varsovians left their heart to bring back the castle to its former glory and believed in a better future.

Castle unarguably become a symbol of the reborn state. Today, you can not only visit the reconstructed interiors but also take a walk around the royal gardens and the nicely restored outer ward. 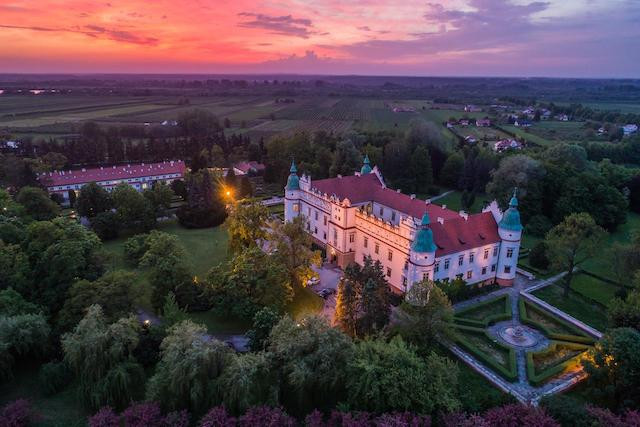 This stunning castle is called “Little Wawel” because of its magnificent architecture. The building is surrounded by a picturesque historic park, and its lavish interiors are beautiful.

The present shape of the castle is an impressive proof of the refined style of the wealthy Leszczyński family. Fancy spending night at the castle? No problem, the castle offers cozy rooms, a restaurant, and a leisure zone. Being a perfect spot for relaxation castle attracts a crowd of tourists from around the world. 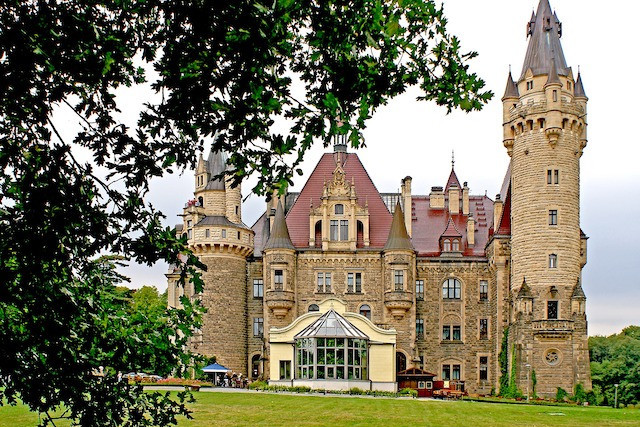 Taken straight out from a fairy-tale, Moszna Castle combines elements of at least three different architectural styles. Hordes of families flock to this unique castle, no wonder why it’s fantasy look makes them smile and awakening even in adults their inner child. The Walt Disney-like castle can be found in the small village of Moszna, about 30 km from Wroclaw.

Surrounded by a 200-hectare park with three-hundred-year-old oak trees is a perfect getaway from a “real life.” The fairy-tale architecture will allow for an eye-catching experience and create unforgettable photos perfect for Instagram. 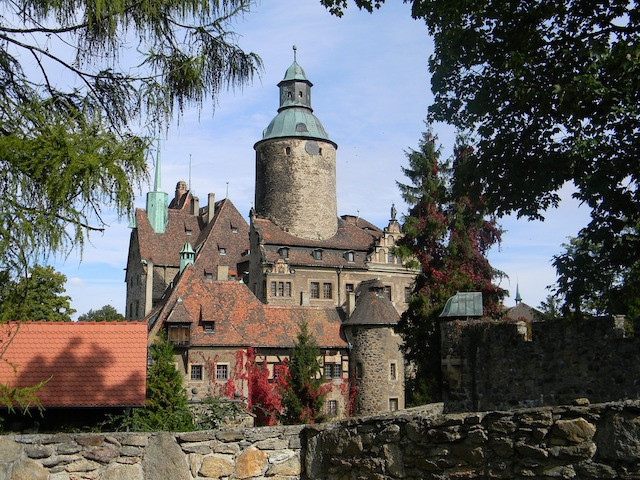 It’s not a stretch to say that in the Lower Silesia region lies some of the best castles in the country, including Czocha Castle.  Being the favorite spot of Harry Potter fans, Czocha castle is a sight to behold. The castle takes history and culture lovers on an intriguing journey where the past connects with the future.

The medieval castle holds many secrets, including one about Nazi experiments during WWII. Today, the castle, hailed Polish Hogwarts, is home to a classy hotel and museum that holds an array of interesting artifacts. 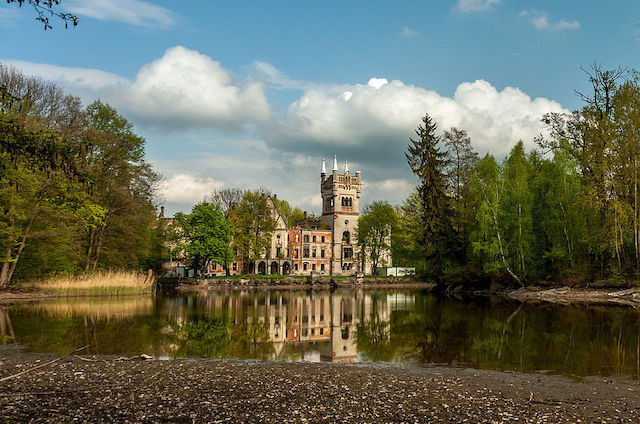 Poland is home to lots of palaces, noble residences, and impressive castles, with a huge number in ruins. One such ancient ruin that you’ll love to see is Kopice Castle. Once, the castle was visited by the wealthiest and most distinguished aristocratic families from all over Europe, as well as politicians, princes, artists, and barons.

It had a vast, sixty-hectare park, lots of sculptures, and a fantastic collection of paintings. There were also hunting trophies, a collection of armor, and rare books. Unfortunately, it has fallen into ruin and would be more suitable for horror movies today.

This unregular tourist attraction cannot be explored, but if you are lucky enough to visit and see it firsthand, make sure to take beautiful photoshoots. Let’s hope that the aforementioned unique object will regain its lost splendor again. 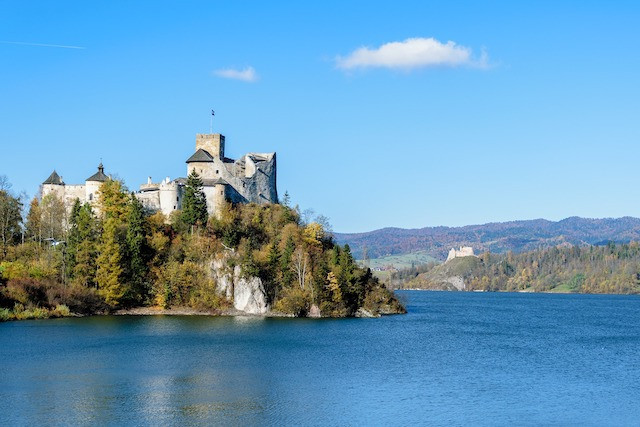 Beautifully situated on the right bank of the Czorsztyn Lake Niedzica castle belongs to the best-preserved medieval fortifications in Poland. One of the most mysterious pages in the castle’s history is the Inca treasure hidden somewhere in the building, furthermore protected by a powerful spell that makes it inaccessible.

Nowadays, it serves as a museum, hotel, and restaurant, being one of the most significant historical attractions of the southern part of the Małopolska Province. 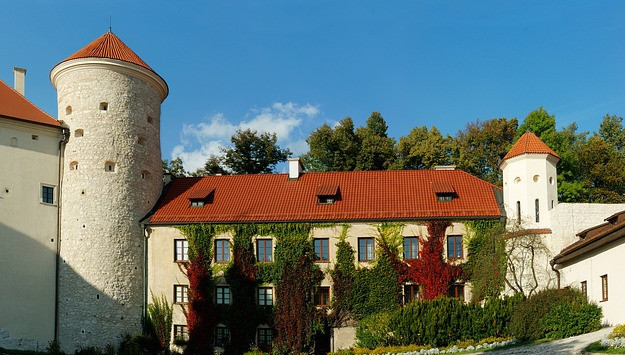 This beautifully settled castle overlooks the picturesque valley and belongs to a small group of Polish Renaissance monuments. Founded by King Casimir the Great as a stronghold, it was part of a chain of fortifications defending the trade route from Kraków to Silesia.

The castle has survived to our times in an almost undamaged condition. Inside, you can admire collections of paintings, sculptures, and crafts from the Wawel Royal Castle’s holdings. Exploring the nature park along with the castle is the perfect option for those who want to take the opportunity to get away from everyday life. 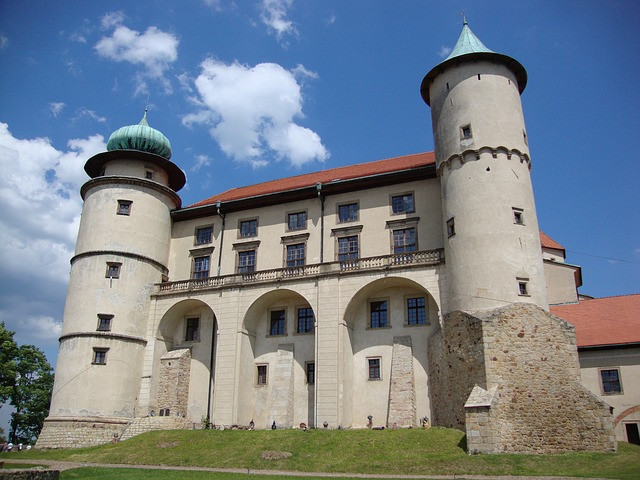 Nowy Wisnicz castle makes an easy getaway from Krakow and is undoubtedly one of the most valuable works of early Baroque architecture in Poland. It is hard to believe that during the deluge in 1655, the Swedes took 150 wagons of prey from the seized castle.

For the sake of the castle, the crew surrendered it without a fight, even though it had 600 well-armed soldiers and had 80 cannons as well as ammunition and food supplies for as much as 3 years! Today castle houses the Wisnicz land museum, which presents an exhibition dedicated to the fortress’s history. 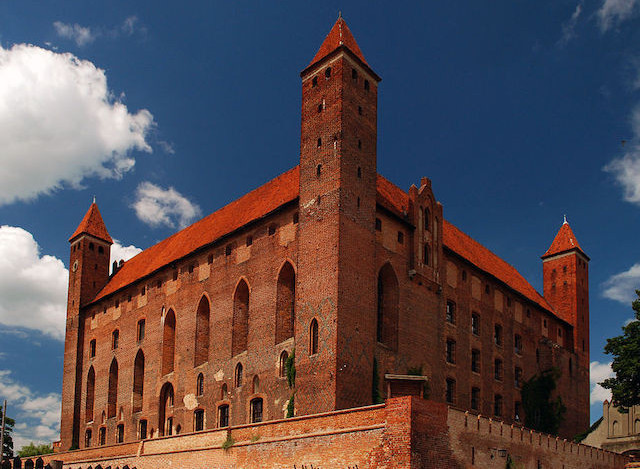 The castle in Gniew is one of those places that combine an unusual, dark history with modernity and comfort. After all, who does not dream of staying in a real castle? Meet this magical place where you will travel through time, unwind and boost your energy levels.

Gniew castle offers guided tours of much of the castle, including its torture chamber located in the basement, chapel, and the tower. Enthusiasts of outdoor recreation will enjoy the view of the surrounding green stretches and the Vistula valley. 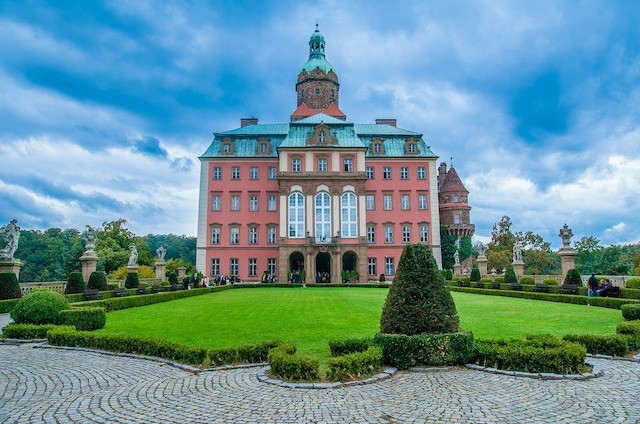 Książ Castle is the real gem of lower silesia, full of secrets, legends, and hidden treasures. The castle becomes a hot spot for both local and international visitors when two explorers announced they had discovered a secret tunnel that house the legendary wartime train laden with lots of treasures. If you love strolling around the grounds and taking in the views of the beautiful castle full of mystery, then it’s a place to be. 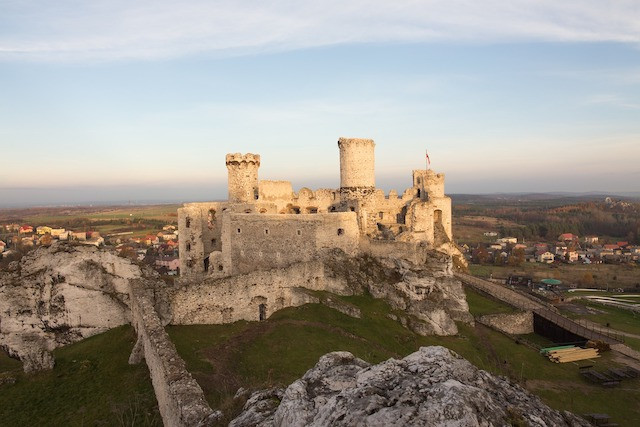 Ogrodzieniec Castle is the largest stronghold of the Eagles’ Nests trail and, without a doubt, one of the most beautiful castles in Poland. Even though it was a massive stronghold, the invaders did not spare it many times by plundering and destroying it.

From a distant white stone, fortress makes a phenomenal impression being a perfect spot for camera shoots. Today the Ogrodzieniec Castle is the so-called permanent ruin, nevertheless if you history buff is worth paying a visit to this majestic fortress. 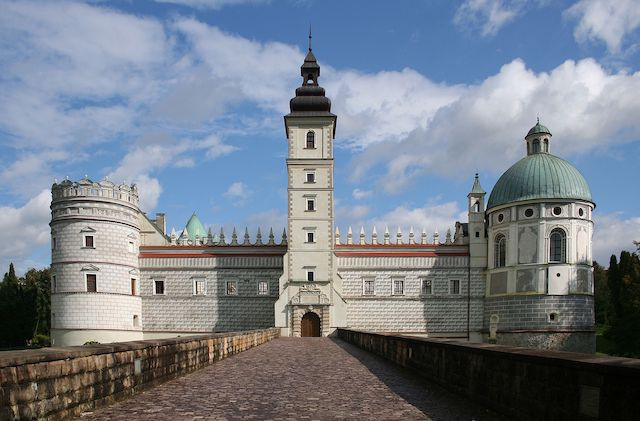 In the small village of Krasiczyn, behind the wall of greenery hides a beautiful 16th-century castle, which is a precious monument of global significance. The castle complex was expanded over time, with the oldest part dating back to the 14th century and the most recent to the 17th century.

The castle is surrounded by one of the most beautiful landscape parks in Poland, where we find over 200 species of trees and shrubs from all over the world. Today some parts of the castle, such as the dungeons, the courtyard, or the observation deck, can be visited with a guide for a small fee. Due to its location, Krasiczyn is an excellent base for a trip to the Bieszczady Mountains or the historic town of Przemyśl. 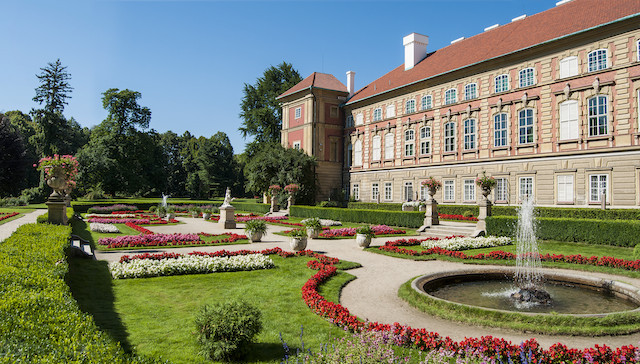 Located in the beautiful small town of Lancut, the castle complex is one of the most beautiful aristocratic residences in Poland. The castle complex, of which Łańcut is so proud, is a desirable destination for every lover of art, architecture, and history. What attractions await guests here?

It’s an exciting place with a museum where you can see beautiful, richly decorated interiors, exhibits of Princess Lubomirska, as well as an extremely valuable collection of horse-drawn vehicles. Visitors can take a walk in the surrounding old, picturesque English-style park.

Perhaps it is not one of the most significant or most spectacular castles in Poland, yet, it has its own charm and is absolutely worth visiting when you travel in the area. 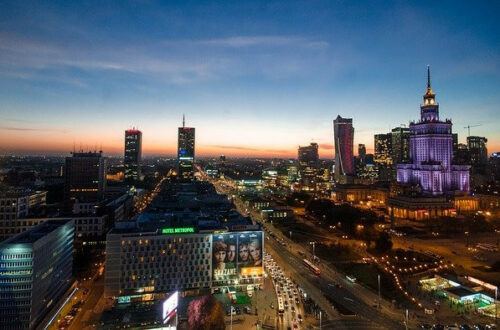 Best Places To Visit in Poland 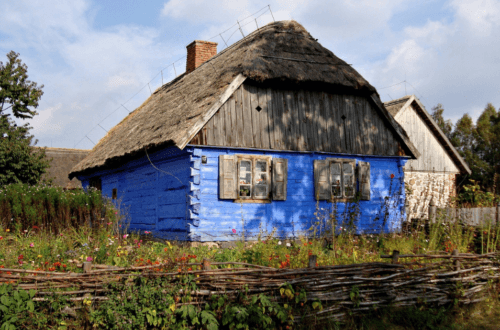