Kwidzyn is a tourist pearl of Poland. The biggest tourist attraction in the city is the castle and cathedral complex. An unusual combination is illustrating the history of the region, beautiful full of glory and contradictions.

History of The Complex

The castle is connected to the Cathedral in Kwidzyn that, at first glance, it is difficult to separate these two objects. They are like Siamese twins. Someone who goes to Kwidzyn intending to see the castle should see the vast Cathedral as well.

The construction of the castle of the Pomezanian chapter began at the turn of the 13th and 14th centuries. After the works aimed at preparing the area, the erection of castle wings and outer ward buildings began. The castle was built of stones and bricks in the form of a four-wing building on a plan similar to a square, with towers in the corners.

The castle held a two-story cloister in the courtyard and an entrance from the north, where there was an economical external building. Most of the construction works at the castle were completed in the years 1340 – 1350. In the 80s of the 14th century, Gdanisko (dansker) was completed.

Initially, the castle was an independent foundation, later it was connected to the Cathedral, and its south-east corner tower was transformed into a belfry. The completion of the new cathedral church is dated to the reign of Bishop Jan Mönch (1377-1409).

At that time, a unique architectural complex was created in Kwidzyn, which included two castles (bishops and chapters), a cathedral, and a city.

Individual components had their own fortifications and were connected by walls, which formed a defense system, perfectly integrated into the natural conditions of the area. The castle became the seat of the Pomezanian chapter as well as a religious, political, and administrative center.

This led to the intervention of Polish troops in areas belonging to the Pomezanian and Warmian bishopric. In 1478, the Polish army captured Kwidzyn. The townspeople took refuge in the chapter’s castle and set the city on fire. During the war, the castle was severely damaged. In 1487 during the renovation works, corner towers were demolished.

In 1520, as a result of further hostilities, the Polish army completely destroyed the bishop’s castle and most likely damaged the chapter’s castle. In 1526, the Pomezanian bishops converted to Protestantism. In the 30s of the 16th century, the first Protestant bishop Paulus Speratus carried out the chapter castle’s renovation at his own expense.

After his death, in 1551, the castle was taken over by officials of Prince Albrecht Hohenzollern, becoming a government building and a residence in which, in 1709, Tsar of Russia Peter I stayed, at the invitation of Prussian King Frederick I.

In 1728, the southern wing of the castle was transformed into a food warehouse for the military garrison. After the first partition of Poland, the castle became the seat of the court. In connection with the change of function, necessary adaptation works were carried out. The rooms on the first floor have been divided into several small rooms.

The western cloister was partially demolished, a staircase leading from the courtyard to the first floor was built in this place. Part of the castle was adapted for prison cells. In 1798, a decision was made to demolish two castle wings: the eastern and the most representative southern, to build a separate building from the obtained material.

After 1854, under the decree of King Frederick William IV, the devastation of the castle stopped, and reconstruction work began. Their most crucial stage was carried out in 1874, under the direction of Gustav Reichert. As a result, the corner towers were rebuilt, the vaults in the rooms on the first floor of the north wing were reconstructed, and the architectural detail was completed.

The castle served as a court and prison until 1935. In 1936, after carrying out several adaptation works, the castle became the seat of the Hitlerjugend HJ-Ostlandführerschule Hitler’s school and held this function until 1945. During the Red Army occupation of the city, fortunately, significant damage was avoided; only its interior was looted. In December 1949, the castle was taken over by the Ministry of Culture and Arts.

Cathedral of Saint John the Evangelist in Kwidzyn

The fate of the Cathedral was closely related to the fate of the castle. The church of St. John the Evangelist was built from around 1325 as the Cathedral of the Pomezanian diocese and the city-parish church. The construction was completed in the second half of the XIV century. The Cathedral from the beginning was part of the complex.

The church was expanded many times, e.g., after the transition of Ducal Prussia to Protestantism in the years 1525-1526. The interior was plastered, and the presbytery and the body were separated by a wall, thus designating places of prayer for the German, Polish, and periodically Czech believers.

In 1705, from the north, the tombstone of Otto Frederick von Groeben was added, in which the tombstone sculptures depicted this Prussian soldier and traveler and three of his wives, with whom he had eighteen children in turn. This chapel was equipped by his last wife until 1728. Rare elsewhere are two ornate Evangelical confessionals made in 1716 by Józef Antoni Krause.

In 1807, the church served as a food warehouse and exercise hall, which was why it was devastated. Then in the years 1816-1817, the first repair works were carried out. In 1862-1864 extensive renovation work took place as a result of which the appearance of the Cathedral from the Middle Ages was restored.

In the Cathedral are buried, among others, Pomezanian bishops, grand Teutonic masters. The renovated crypt of the Grand Masters was made available to visitors on July 31, 2010. The burial chambers discovered during archaeological research were not covered again with a stone floor, but with sheets of tempered glass.

In the coffins of the Grand Masters, mannequins dressed in robes and coats were placed. Next to it, we can find reliquaries with the remains of each of them and a collective box with ashes of 4 or 5 Pomezanian bishops. 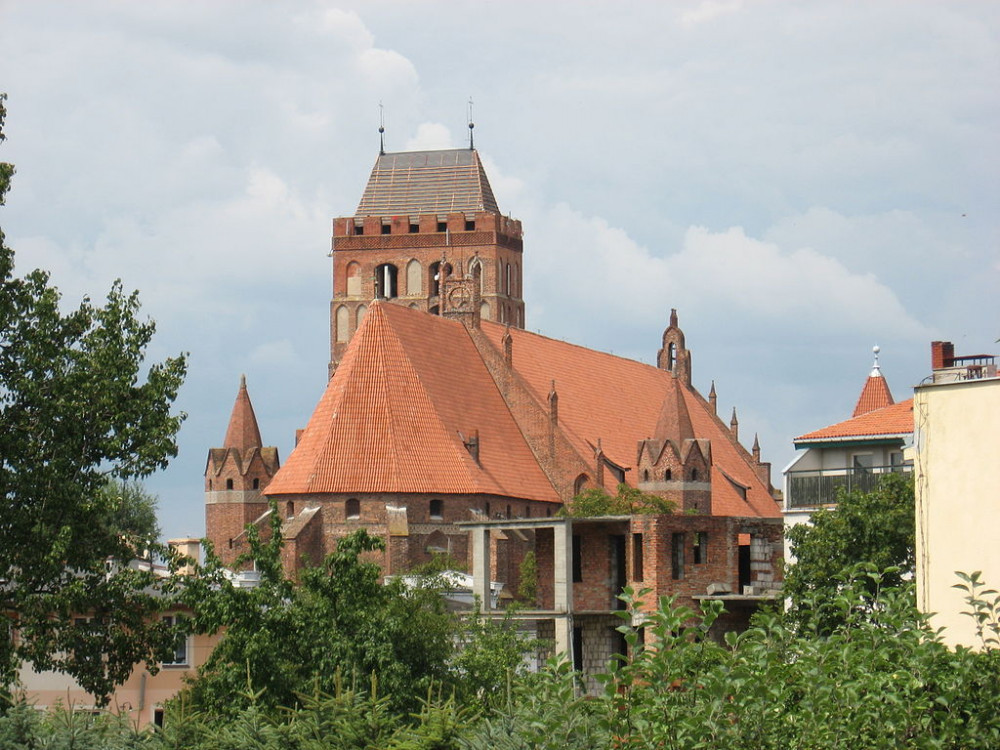 Its characteristic architecture, especially from the side of dansker, is stunning. As a matter of strictness, I would like to add that dansker is a unique element of Teutonic castles, it is a fortified tower located at a distance from the castle, and connected to it by a porch.

This fortress probably has the greatest outhouse in the world. It is the longest and most picturesque combination of the castle with a defensive outhouse. A similar structure can be found in Toruń or Malbork, but the one in Kwidzyn is the most recognizable.

We can start visiting the interiors by visiting the castle cellars. Various artifacts can be found there, even a torture chamber with a stump and an ax in the middle.

Next, we should head to the upper castle, where we can see numerous exhibitions and rooms such as winter refectory, chapel, well tower, or dansker.

The facility also has rooms dedicated to the ethnography of the region, where we can see old village work tools, embroidered costumes, painted wardrobes. The last part is the Natural Museum illustrating flora and fauna of the Kwidzyn area.

After visiting the castle, I recommend going to the nearby Cathedral. In the Middle Ages, sacred buildings were built in such a way to make the men feel small. The volume of the Cathedral, its perimeter, height, details are enhancing the impression of greatness. But the interior of the Cathedral in Kwidzyn is even more impressive.

Its splendor was not only great architecture but also sumptuous furnishings with high artistic value. Unfortunately, many works of art were lost, many were destroyed. At the moment, the cathedral interior seems to be raw, empty, partly as the result of nineteenth-century restoration work.

However, we will still find a lot of valuable, unique equipment, which is a combination of monumental architecture and asceticism. The current interior design was primarily determined in the 19th century during extensive restoration work. They were carried out with great care and were managed by one of the greatest German architects of that time – Friedrich August Stüler.

In the upper and lower church, we can admire medieval frescoes, altar, organs, and more. This journey, through the motives, gives you real joy and will remain in your memories. 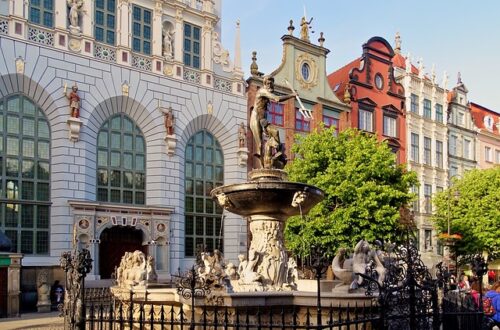 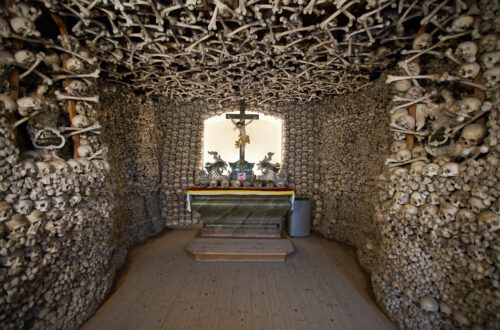 The Chapel of Skulls in Kudowa-Zdroj, Poland